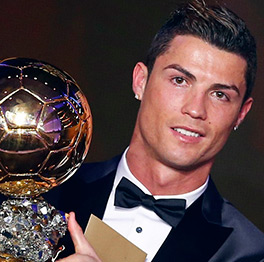 Type "Cristiano Ronaldo montage" into YouTube and it brings up 238,000 hits, so it was appropriate that the man himself celebrated winning the FIFA Ballon d'Or for the second time by releasing a short highlights reel of his stellar 2013, as a way of saying "obrigado" to his legion of fans.

Ronaldo's YouTube channel had published an underwhelming video two weeks earlier which also looked back at his past year – but featured no footage of the Portuguese maestro in action.

As he has been doing to the rest of the football world over the past 12 months, he was just toying with his fans.

The video he released, soon after he accepted his award in Zurich, is what they were really craving. It is perfect football content: goals, grimaces, music and skills. Lots of skills.

To round things off, the video ends with the following text: "Awards are good, but your support is way better."

It's worth noting that the video doesn't promote Ronaldo's personal sponsors, such as Herbal Life or Nike, or even his own CR7 brand. It's just a genuine "thank you".

Winning the FIFA Ballon d'Or, which ended Lionel Messi's four-year grip on the trophy, clearly meant a lot to Ronaldo. He was in tears upon taking the stage, and the dam really burst on seeing his mother in the crowd (also crying).

Despite his emotional state, or perhaps because of it, Ronaldo was keen to dedicate his award to his team-mates at Real Madrid and Portugal, the people of Portugal and Eusebio, the legendary Portuguese footballer who died on 5 January.

On Eusebio, Ronaldo spoke poetically in English: "Eusebio passed away but still in his heart, and from the sky, he sees this great moment for a Portuguese player."

Ronaldo – who won his first FIFA Ballon d'Or in 2008 (when it was known as the FIFA World Footballer of the Year) – also used the media in Zurich to put the message out that his ambitions don't end here.

He said: "I have to be proud of my work, what I did during the year - and this is going to give me motivation to work more and dedicate myself more for the future. I hope to be here next year to try and win the third one."

Ronaldo knows that if he does retain his crown for 2014 it will probably mean Portugal have also won the FIFA World Cup in Brazil. Such stated ambition is rare in the football world, where players are loath to look too far ahead, but Ronaldo's confidence, self-belief and outrageous ability on the field must have his international team-mates believing that they can genuinely mount a serious World Cup challenge.