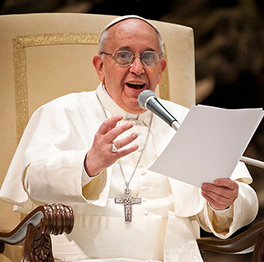 Whatever members of the Catholic Church expected from Pope Francis on his election in March, it probably wasn't avid sports fandom.

His passion for sport has brought some star names to the Vatican City in the past six months, including Mario Balotelli, Carlos Tevez and both the Italian and Argentinian rugby union sides.

This past week it was the turn of FIFA President Sepp Blatter, IOC President Thomas Bach and an EOC delegation led by President Patrick Hickey. They were all received at separate times, the delicate nature of sports politics clearly not being lost on Pope Francis.

With the sports world now regularly coming to his doorstep, Pope Francis has a platform from which to reach out and communicate with a global audience of millions.

He pushes his message by using thought-provoking language and an evocative turn of phrase. In his speech to the EOC delegation, he spoke of sport as a way of "training for peace", and how athletes should be inspired by "uprightness" and a "lively" sense of responsibility.

Even allowing for translation from Italian to English, this is not the regular lexicon of the sports industry – and it makes for a far more compelling message than usually emerges from the high-level handshake photo-opp.

Pope Francis's praise for sporting values also carried with it warnings similar to those he has given about unchecked capitalism and irresponsible governance by politicians.

Again in his speech to EOC delegates, he said: "Sport is harmony, but if the immoderate pursuit of money and success takes over, this harmony can be lost."

Pope Francis's media-friendly engagement with the sports community will have offered sports organisations a firm reminder of their social responsibilities. Just as importantly, it was paean from sport's global lectern to the values sport can inspire in all of us.