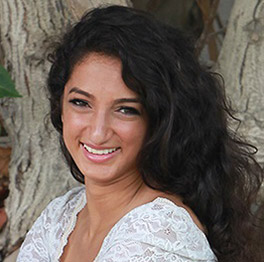 Raha Moharrak is the first Saudi Arabian woman to climb Everest and she soared just as high at the IOC World Conference on Sport and the Environment in Sochi this week when talking about mountaineering and the environment.

Moharrak was put on the opening (and most high-profile) bill of the conference, which included IOC President Thomas Bach, IOC Vice-President Sir Craig Reedie, and Sochi 2014 Organising Committee President and CEO Dmitry Chernyshenko. Yet the 27-year-old amateur mountaineer was the star attraction in the conference hall.

Moharrak spoke eloquently and passionately on two themes: environmental sustainability and empowering women to be "relentless in being who you are."

Her speech addressed how the third pillar of the Olympic Movement – environment – can be protected and enhanced by people and communities through sport.

Describing how she felt on reaching the peak of Everest, she said:

"At that moment, the appreciation of my predecessors' efforts in preserving the Earth grew tenfold. Just as I had the right to access clean air, pure water, clean grounds and lush forests, it's only fair to pass the torch to the next generation and instil in them that crucial environmental stewardship.

"After all, it was this beautiful Earth that inspired me and intrigued my curiosity to climb."

Moharrak is also determined to communicate her experiences in scaling the world's highest peak to other women, and men, because she believes her stories can inspire.

Moharrak is not the only outspoken advocate for women's empowerment to come out of Saudi Arabia recently. Who can forget the sight of Sarah Attar, the country's first woman to compete in Olympic track and field events, finishing her 800m heat at London 2012 to a standing ovation from the crowd?

With role models like these, willing to tell their stories, women's sport in Saudi Arabia will continue to grow – and with it, their capacity to become "relentless in being who they are".